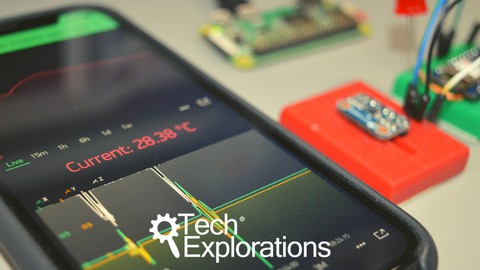 Learn how to use the Blynk platform to create apps for iOS and Android that works with the Arduino and ESP32.

Description
With this course, you will learn how to use the Blynk platform to create apps for iOS and Android that work with the Arduino Nano 33 IoT and the ESP32 or any other supported device.
With a Blynk smartphone app, you will be able to create powerful applications that integrate your smartphone with any supported device to read data from sensors, control motors, log data, and send out notifications.
The Blynk Platform consists of a smartphone application for Apple iOS and Android, microcontroller libraries for dozens of devices like the Arduino MKR 1010, and server software for Linux or Windows hosts.
The Blynk smartphone app is like the Arduino IDE: it is a smartphone app editor that allows you to compose your smartphone app using a simple drag-and-drop interface.
No programming is needed.
The main focus of the Blynk platform is to make it super-easy to develop the mobile phone application.
As you will learn in this course, developing a mobile app that can talk to your Arduino is as easy as dragging a widget and configuring a pin.
The Blynk device libraries make it easy to connect an Arduino or other microcontroller to a Blynk project. For programming a device like the Arduino Nano 33 IoT or the ESP32, you will use the Arduino IDE.
And, the Blynk server is the component that allows your Blynk smartphone app and as many devices as you want to integrate within one or more Blynk projects.
This course is perfect for people who want to create mobile phone-powered microcontroller applications.
You may want to create a home automation system, a rocket launcher, a robot, or even an industrial automation application.
All this is possible with Blynk.
This course will introduce you to the Blynk platform through a series of projects based on an Arduino Nano 33 IoT and an ESP32.
You will also show you how to set up your Blynk private server on a Raspberry Pi Zero W so that you can create applications without limitations of size and performance that the public server imposes.
Who this course is for:
Reactions: mastorzio, cho0529, Aly Khan and 8 others