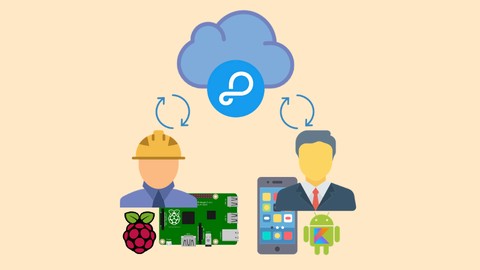 Description
In this course, we will guide you step by step to build your own real time attendance tracking system using Raspberry Pi, Android, Kotlin and Parse server.
We will start by introducing the used technologies to build the real time attendance tracking system.
We will teach you how to use Raspberry Pi to control I/O devices like LCD display, 4x4 Keypad and RFID Chip.
We will teach you as well, how to create android applications using Kotlin, and we will see together how to use basic concepts in Android, like TextViews, Buttons, EditTexts, RecyclerView, Date picker, Camera, Gallery, etc.
You will learn also, in this course, how to use Parse server to create a cloud backend for your applications, and you will be able at the end of this course, to manage your stored data in Parse, using either the Raspberry Pi through the REST API and Python, or using Android Kotlin through the Parse client API.
Also, you will learn how to implement push notifications in your Application, and how to send notifications from the Raspberry Pi using the REST API.
Finally, the capstone project consists of building a real time attendance tracking system using the learned features, this project will be composed of three sides, the first one will be the Raspberry Pi based device which will be used by the employees to mark their attendance using the RFID tags, and the second side will be the Kotlin based Android Application which will be used by the admin to track the attendance of his employees in real time.
These two sides will connect together using Parse backend App.