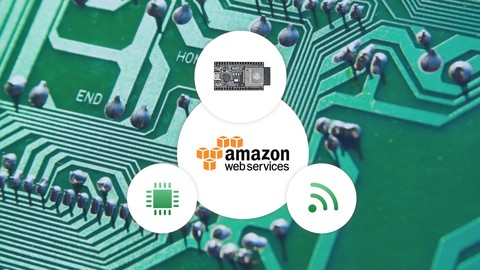 Before the course starts we need an AWS free tier account, a local installation of the AWS CLI tool, and installation of the MQTT.fx testing tool (all free). After this is set up we will program inexpensive, WiFi enabled embedded devices such as the ESP8266, ESP32, and Raspberry Pi to communicate with AWS IoT Core with MQTT.

We will take advantage of free "Internet of Things" (IoT) development environments, like Mongoose OS in JavaScript, Arduino in C, Zernyth in Python, AWS FreeRTOS in C, and the AWS IoT SDK in both JavaScript and Python for the Raspberry Pi to program our inexpensive WiFi devices.

You will need at least one or more of the following devices to transmit data to AWS IoT. Alternately, you can send JSON test payloads from IoT Core directly, imitating a IoT device. The course continues on with programming our embedded devices to send data from the device to the AWS cloud. To transmit our data we will use the built in MQTT broker on our devices firmware, sending JSON encoded sensor data, to the AWS IoT console.

From within the IoT console we will create AWS IoT “Rules” and “Actions” to explore many of the built in AWS IoT enabled services that are integrated in the AWS IoT Core console on the AWS cloud. Creating rules-based actions to AWS services we will send, store, file, manipulate, graph and analyze our sensor data through a variety of important AWS applications. Some of these integrated applications, using these rule-based actions, are Dynamo Database, S3, SNS, Lambda, Data Pipeline, Glue, QuickSight, AWS IoT Analytics, and SageMaker.

IoT is largely the fusion of devices and the web, specifically the cloud; all sending and recording data, ubiquitously and continually, everywhere. Understanding and being able to prototype and implement an end-to-end, device to cloud path communication is a much in demand career skill.

Having the skills to build a prototyping IoT solution in the cloud is already an important and highly demanded skill set for those wanting to call themselves IoT developers, and this is more true as time goes on and IoT exponentially expands as cheap connected devices become wide-spread.

Remember! 30 days money-back guarantee with no questions asked. I want you to be happy with the value I believe this course provides.
Who this course is for:
Reactions: med19, mastorzio, namosumo and 8 others