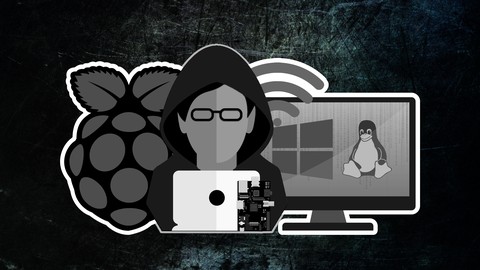 Description
This course, you are going to start as a beginner without any previous knowledge about the hacking, this time we will use the Raspberry Pi instead of our PC/Laptop for hacking, we will start from setting up the Raspberry Pi ending with using it carry our various attacks like Wi-Fi, Windows, Linux, Mac OS hacking.
This course is intended for beginners and professionals, if you are a beginner you will start from zero until you become an expert level, and if you are a professional so this course will increase your knowledge about the hacking.
In this course, you'll learn how the Black Hat Hackers use the Raspberry Pi to implement remotely advanced hacking techniques to Crack WEP/WPA2 Wi-Fi encryption key and to Compromise Windows, Linux and Mac OSX operating systems by setting up the Raspberry Pi 3 as a server and Raspberry Pi zero as the hacking hardware.
The course is divided to eleven sections:
Configure Raspberry Pi: In this section, you'll learn what Raspberry Pi is and what it is used for, and also the section focuses on configuring the Raspberry Pi to run Kali Linux properly, and also it discovers solving for the issues that you may face during setting up the Raspberry Pi , you'll also learn how to setup an LCD display to your Raspberry Pi 3.
Connecting to Raspberry Pi: After learning how to configure and deal with the Raspberry Pi 3, in this section you'll learn multiple ways to connect to your Raspberry Pi using your PC/Laptop, Android and iPhone smartphones wirelessly or using USB cable to connect to Raspberry Pi GUI (Graphical User Interface) via VNC server and to its CLI (Command Line Interface) via SSH.
Network Basics: This section explains the basic concepts of the networks that you have to understand before you get into Wi-Fi hacking it will elaborate you the difference between Managed & Monitor modes in Wi-Fi cards and also it will explain what the Mac Address is and how to spoof it.
Pre-Connection Attacks: This section teaches you the attacks that you can carry out against any Wi-Fi access point without having to be associated with it, these attacks are very important to understand and learn because it's the key of the next Wi-Fi cracking section.
Cracking WEP Wi-Fi Key using Raspberry Pi: This section focuses on explaining what WEP encryption is and different methods types to crack WEP Wi-Fi key, this section focuses on the practical side without neglecting the theory behind each attack.
Hacking Wi-Fi Access point by Cracking the Password: This is the first section of Hacking WPA/WPA2 Key series where it is going to focus on cracking WPA2 Wi-Fi key using dictionary attack, it will show you how to implement the attack using your Raspberry Pi, your computer CPU and also cracking the key much faster using your computer GPU.
Hacking any Wi-Fi access point using Raspberry Pi (Without Wordlist): This section shows you the last option or the last attack that you can use to steal WPA2 Wi-Fi key without using a wordlist, this done by using Evil Twin attack that will jam and clone the target access point and broadcast it to force the target to connect to it and type the key.
Setup Raspberry Pi 3 to Hack Windows, Linux, Mac OSX: This section discovers setting up the Raspberry Pi 3 to work as a server to listen for a reverse connection from the target OS and it also explains how to create a stager or payload for Windows, Linux and Mac OSX that will give us access to the target OS and lastly it shows you how to get a reverse connection over WAN.
Hacking Windows/Linux just by plugging Raspberry Pi Zero: This section will take you step further by teaching you how to use Raspberry Pi Zero w to gain access to any Windows or Linux operating system just by plugging it to the targeted computer and it also explains stealing and crack locked Windows login credentials just by plugging it to the target computer.
Post Exploitation (Windows, Linux): After learning how to gain access to any Windows and Linux OS, this section will continue with you by explaining the attacks that can be launched on the target machine like maintaining your access for later use or escalating your privileges to an administrator or root, or to run some modules that will give you more sensitive information about the compromised machine.
Bonus Section: This section contains all the extra lectures that i'll added to this course and 95% discounts on all my Ethical Hacking Courses to improve your hacking skills.
The Recommended Wi-Fi Chipsets:

Notice: This course is only for the educational purposes and all the attacks that have been carried out are in my own Penetration testing lab and against my own devices.
Who this course is for:
Reactions: alireza78, vishalrajg22, tommy123142 and 23 others