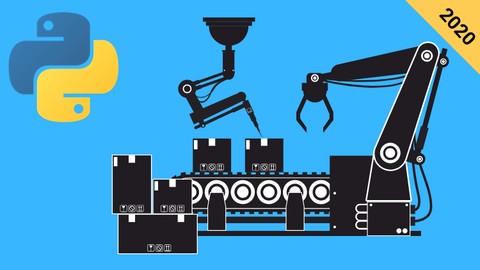 What you'll learn
Requirements
Description
***Fully updated for 2020*** This Network Automation with Python course also covers every major General Python Programming topic and is a perfect match for both beginners and experienced developers!
Course Updates:
Welcome to this Python hands-on course for learning Network Automation and Programmability with Python in a Cisco or Multivendor Environment, taught by a DevOps Engineer and Professional Trainer.
Boost your Python Network Programming Skills by learning one of the hottest topics in the Networking Industry in 2020 and become one of the best Network Engineers!
This course is based on Python 3 and doesn't require prior Python Programming knowledge. Everything is included within the course and you'll also learn in-depth general Python Programming.
Just starting out with Python Programming, Network Automation, or Network Programming using Python and have the desire to learn the future of Network Programmability in a practical way? Perfect. Then, this course is the right one for you. You'll boost your career with hands-on Network Programming Skills!
Or maybe you've already tried to learn Network Automation with Python by yourself and now you want to put all pieces together? I'm here to help you, this course has everything you need to know to automate network configurations with Python.
Most examples in this course are for Cisco IOS, but they can also be used in a multivendor environment (Juniper, Arista, HP, Linux) with no or little changes. This is a vendor-neutral course and teaches you Python from scratch.
You'll have lifetime access and you can return and look for a specific Python library or example anytime you want. And let's not forget, if you don't like the course, you are covered by a 30-day money-back guarantee, full refund, no questions asked!
You'll have access to all Slides and Python Scripts (ready to be used) from this course.

TESTIMONIALS
★★★★★ "This course was much better than I expected. It's high-quality Python Programming in the area of network automation and the instructor is really experienced. Thank you!" by Joseph Heinrich
★★★★★ "Wow! This is an amazing course on network automation and python. It goes directly to the point. The Netmiko section is the best. I'm just waiting to test this at my work. Thank you!" by D. Schmidt
★★★★★ "This is without doubts the best course on Network Automation with Python out there!" by Muhammad Ali

There are many courses on Python Programming and Network Automation or Network Programming with Python. Why should you learn from me?
The topics covered in this Python Network Programming course are:
The topics covered in the General Python Programming sections are:
Every topic includes many live examples in Python. This course will show you the best practices for developing production-ready Python Networking Automation Scripts for Cisco and Multivendor Environments.
Who this course is for:
Reactions: Jayre, vaderkaed, mdbiddut219 and 40 others