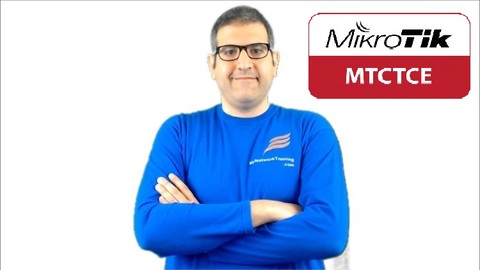 What you'll learn
Requirements
Description
***This course is not officially sponsored by MikroTik and not an authorized course. We are neither affiliated with nor endorsed by MikroTik. We respect the Trademarks of the mentioned company and institution.***

How to control traffic on MikroTik? A question that is always asked by students. If you have a network then you have traffic generated and the Mikrotik Router can control the traffic the way that you want.
For example you can create filter rules to filter the unwanted traffic passing via the router or to the router itself. You can use the MikroTik firewall to block all type of attacks such as DOS, Ping flood, Syn Flood etc...
You can also create the QOS so you can classify the bandwidth based on type of traffic they do and you can prioritize important traffic. And much more things you can do with the control of your traffic on the MikroTik Router
In this course I am going to explain about all of these topics and will go in depth in each one of them.
This course will help you to be ready for the MikroTik MTCTCE exam and it will contain a lot of real LAB scenarios to explain in details the best way to make traffic control in your network.