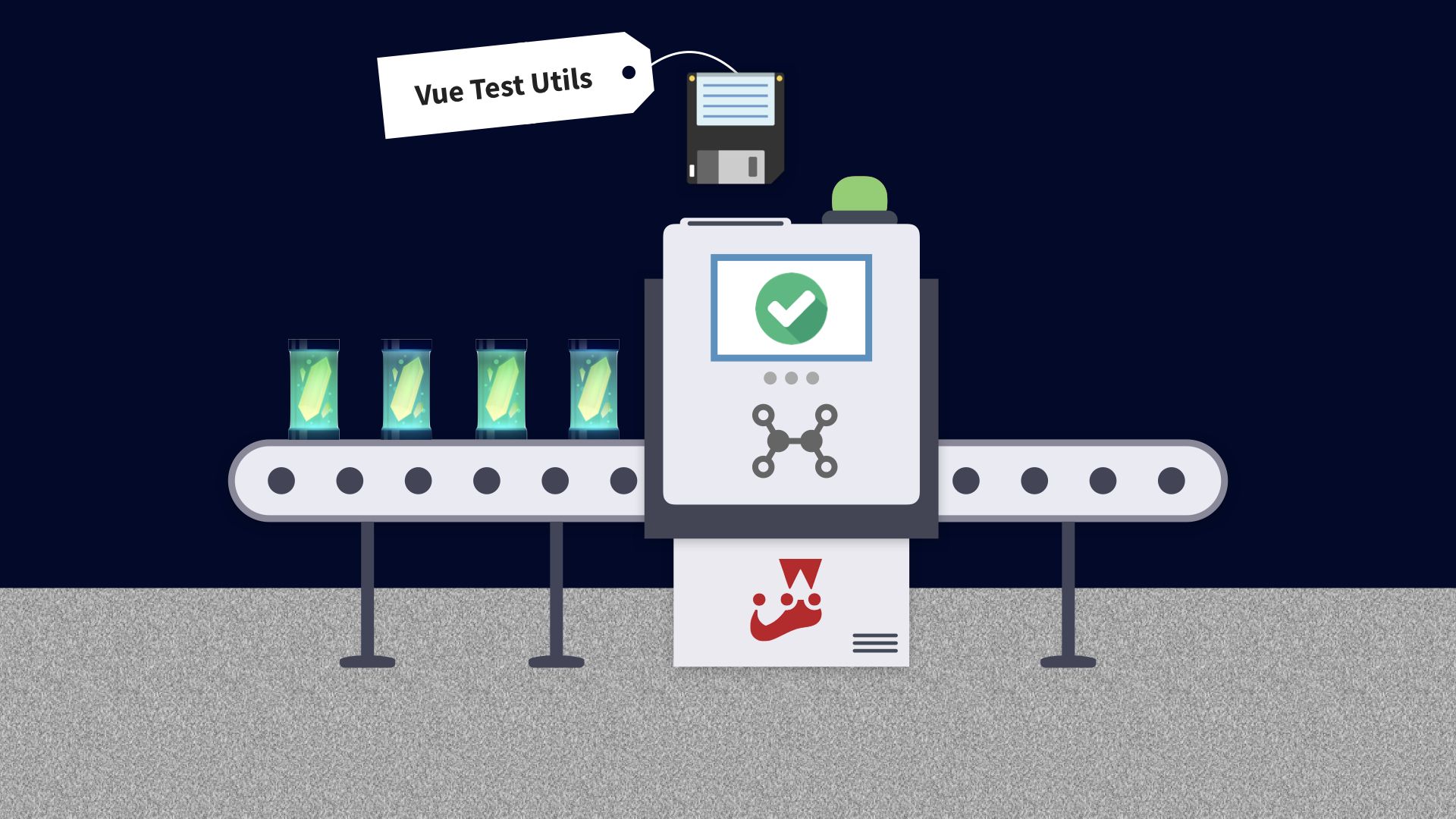 What to test
Have you ever deployed a new feature in your app and crossed your fingers, hoping you don’t wake up to the news that you’ve accidentally introduced a brand new bug? You can greatly reduce these kinds of concerns, and strengthen your Vue apps, by testing your application.
A thoroughly tested application generally consists of a well implemented combination of several kinds of testing, including End to End (E2E) testing, sometimes Integration testing, Snapshot testing, and Unit Testing. This course specifically serves as a beginner’s guide to unit testing in Vue. As you’ll see throughout the course, unit tests serve as the foundation of a well tested app.
In this course, we’ll be using the popular Jest JavaScript testing library to run our tests, along with Vue Test Utils, the official unit testing utility library for Vue.
Goals of writing tests
In the following lesson, we’ll write our first test. But first, let’s gain a clear understanding of the benefits of testing your apps. What do we hope to gain from all of this added work of writing more code to test our code?
Boosted Confidence
Beyond sleeping better at night after a new feature deployment, testing helps bring everyone in your team onto the same page. If you’re new to a repository, seeing a suite of tests is like having an experienced developer sitting right next to you and watching you code, making sure you are staying within the proper lanes of what the code ought to do. With these tests in place, you can feel confident you aren’t breaking anything when adding new functionality or changing existing code.
Quality Code
When you write your components with testing in mind, you end up creating isolated, more reusable components. If you start writing tests for your components and you notice they aren’t easy to test, this is a clear sign that you can probably refactor your components, which can end up improving them.
Better Documentation
As alluded to in the first point, another result of testing is that it can end up producing good documentation for your development team. When someone is new to a code base, they can look to the tests for guidance, which can provide insight around the intentions for how the components should work, and provide clues to edge cases that may be tested for.
Identifying what to test
So we know that testing is valuable, but what exactly should we be testing in our applications? It’s easy to go overboard and test things you don’t have to, which unnecessarily slows down development time. So what do we test in a Vue.js app? The answer is actually quite simple: components. Since a Vue app is merely a puzzle of interlocking components, we need to be testing their individual behavior to make sure they’re working correctly.
The Component Contract
When first learning about Vue unit testing myself, I found it helpful when Ed Yerburgh (who literally wrote the book on Testing Vue.js Applications) spoke about thinking through the component contract. By that, we’re referring to the agreement between a component and the rest of the application.
For example, imagine a component that takes in a min and max prop and generates a random number between those prop values, which it renders to the DOM. The component contract says: I will accept two props and use them to produce a random number. Inherent within this contract is the concept of inputs and outputs. The component agrees to receive the min and max props as inputs and to deliver a random number as the output. As such, we can start to pick apart what we should be testing by thinking through the component contract, and identifying the inputs and outputs.
At a high level, common inputs and outputs are as follows:
Inputs
Outputs
By focusing on these specifically, you avoid focusing on the internal business logic. In other words, we shouldn’t be getting bogged down by worrying about how every single line of code works. It may seem counterintuitive, but the goal of unit testing is purely to ensure your components are producing the expected results. We aren’t concerned here about how it arrived at that result. We may even change the way we’re logically arriving at that result later on, so we don’t want our tests to be unnecessarily prescriptive about how that ought to be achieved. It’s up to your team to figure out the most efficient path to that result. That’s not the job of testing. As far as a unit test is concerned, if it works, it works.
Now that we know what we should be testing for, let’s look at a couple basic examples and identify what we might test in each.
Example: AppHeader Component
In this example, we have a component that will display a logout button if the loggedIn property is true.

To get clear on what part of this component we ought to test, our first step is to identify the component’s inputs and outputs.
Inputs
Outputs
With more complex components, there will be more aspects of it to test, but the same general approach applies. While getting a feel for what you ought to be testing is certainly helpful, so is knowing what you should not be testing. So let’s unpack that now.
What NOT to test
Understanding what doesn’t need to be tested is an important part of the testing story that many developers don’t think about, and in turn it costs them a lot of time that could be spent elsewhere.
Let’s look again at the example from earlier, where we have a component that takes in a min and max prop and outputs a random number within that range. We already know we should be testing the output that is rendered to the DOM, and to do so we’ll need to be considering the min and max props in our test. But what about the actual method that is generating the random number? Do we need to test that?
The answer is no. Why? Because we don’t need to get lost in the implementation details. 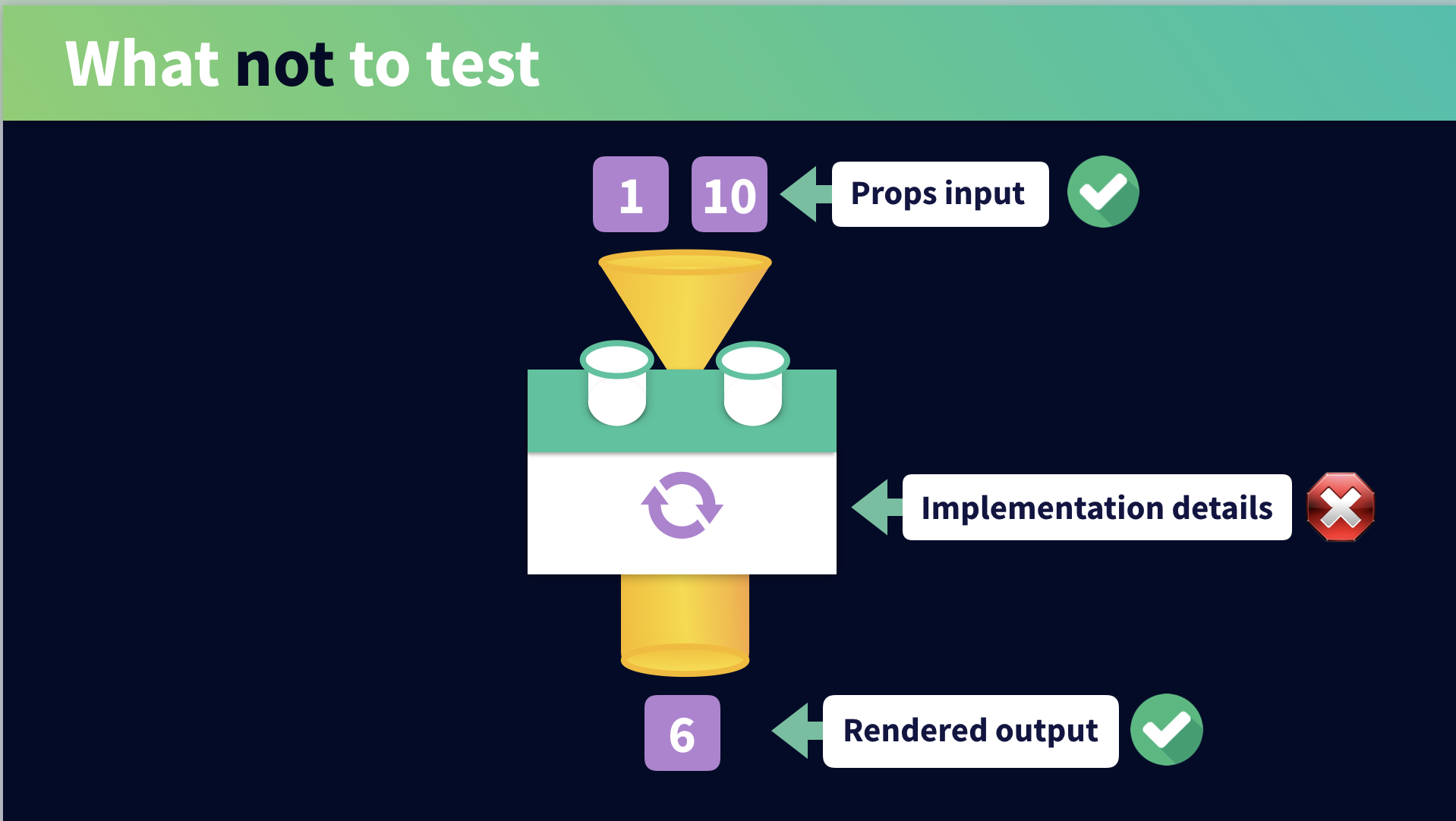 Don’t test implementation details
When unit-testing we don’t need to fuss over how certain things work, just that they do work. We don’t need to set up a test that calls the function that generates our random number, making sure it behaves in a certain way. We don’t care about the internals here. We just care that the component produced the output we are expecting. This way, we can always come back later and replace the implementation logic (with a third-party library for generating random numbers, for example).
Don’t test the framework Itself
Developers often try to test too much, including the inner workings of the framework itself. But the framework authors already have tests set up to do that. For example, if we set up some prop validation for our min and max props, specifying they need to be a Number , we can trust that Vue will throw an error if we try passing in a string. We don’t need to waste our time doing Evan You’s job and testing the Vue.js framework. This includes not doing needless tests on Vue Router and Vuex, too.
Don’t test third party libraries
If the third-party libraries you are using are of high quality, they will already have their own tests. We don’t need to test their internals. For example, we don’t need to test that Axios works how it should. The Axios team does that for us. These are the types of things that will bog us down if we worry about them unnecessarily. If you don’t feel you can trust the library you’re using to have been well tested, perhaps that’s a sign you might want to avoid using it to begin with.
Let’s ReVue
In this lesson, we took an important first step before writing effective unit tests: identifying what you should and shouldn’t be testing in components. With this approach, we can focus our time wisely on testing the pieces that need to be tested. In the next lesson, we’ll take this knowledge and write our first unit test.
Reactions: lotuz, mohsenfar, paco_1705 and 41 others