Register & Get access to index
You are using an out of date browser. It may not display this or other websites correctly.
You should upgrade or use an alternative browser.
Overview Reviews (2) Discussion
You can download a maximum of 0 files within 24 hours 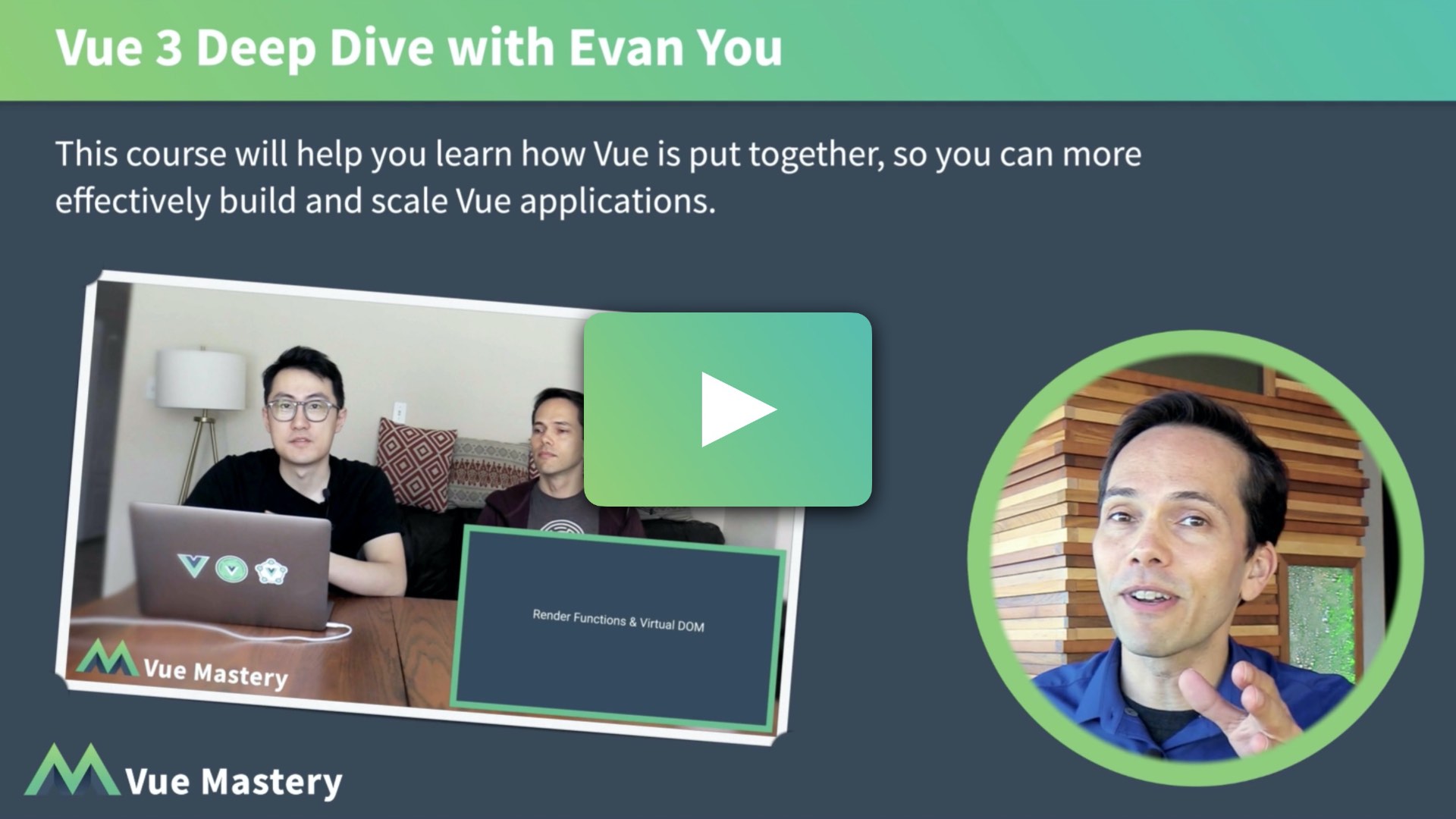 Vue 3 Overview
This Vue 3 course with Evan You will help you learn how Vue is put together, so you can more effectively build and scale Vue applications. The majority of it is taught by Evan, but before I hand over the teaching to him, it’s important that you understand some core Vue concepts.
What is the DOM?
Dom stands for Document Object Model, and it’s the our browser’s interface (API) to change what is displayed in the browser.

We use JavaScript to manipulate DOM, like so:
let item = document.getElementsByTagName("h1")[0];
item.textContent = "New Heading";

This would update our h1 heading.
The Problem with the DOM
The underlying problem with using and manipulating the DOM is that some pages have thousands of nodes. This is why some frameworks (like Vue) have something called the Virtual DOM. The Virtual DOM is a way of representing the actual DOM with JavaScript Objects.

Above you can see how we can express a div as a JavaScript object. Vue then knows how to take this Virtual Node and make the appropriate JavaScript calls to create an actual DOM Node in the browser. There’s actually an extra step in this lifecycle, called render functions.
What is a Render Function?
When Vue receives a template, before creating a Virtual Node, it first compiles it into a render function. You can see this below: 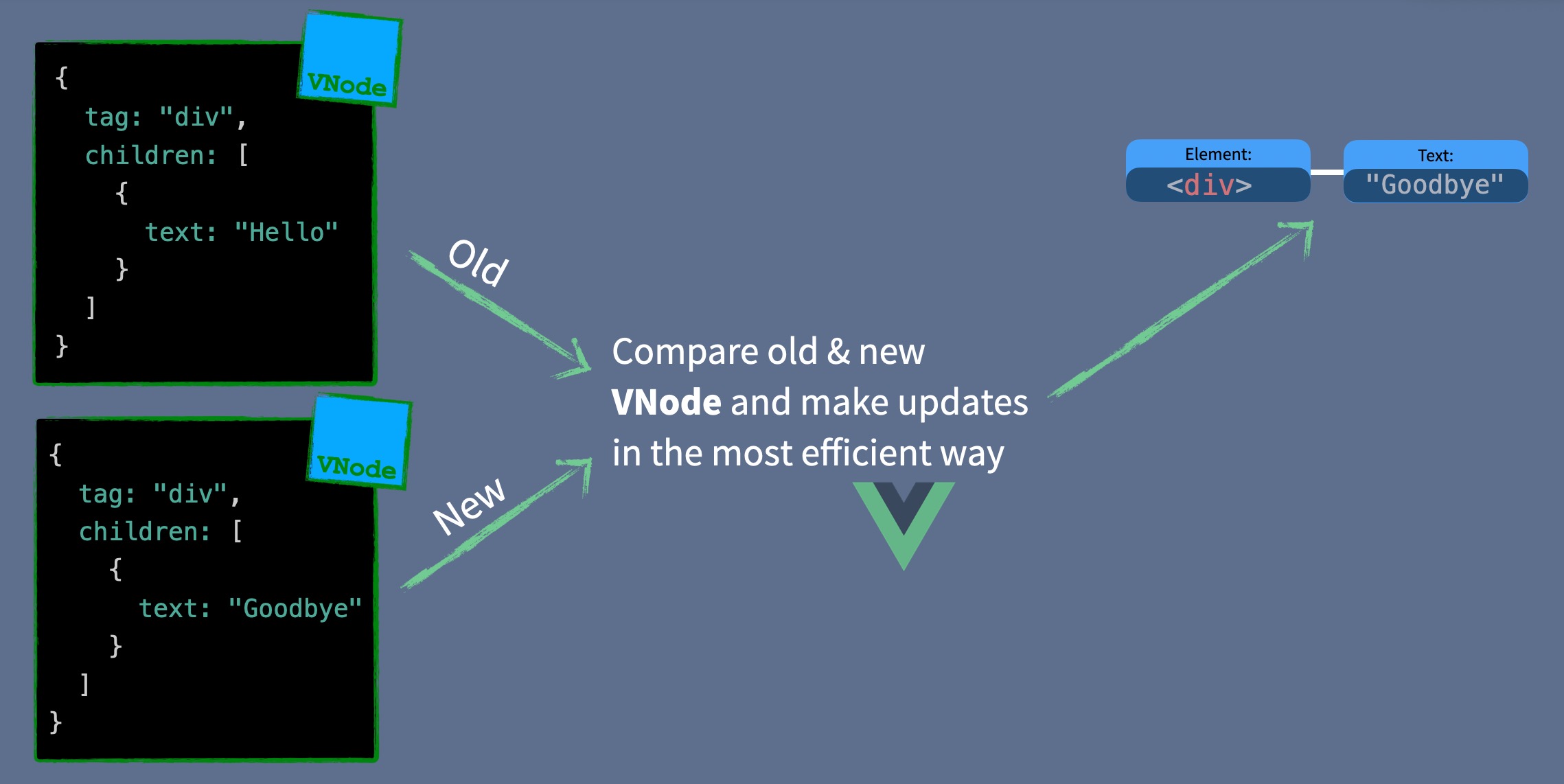 An Analogy of the Virtual DOM
A good way of understanding the Virtual DOM vs the Actual DOM, is blueprints (Virtual DOM) vs the actual building (Actual DOM). If I make changes to the 29th floor of the building, such as changing the layout of the furniture and adding new kitchen cabinets, I can make updates to the building in two ways:
Obviously, the second option is going to be faster.
What is the Anatomy of Vue 3?
Vue 3’s core engine is made up of multiple parts.
Reactivity Module. This allows for creating JavaScript reactive objects that can be watched for changes. When code which use these objects are run, they are tracked to be run later if the reactive object changes. If you haven’t played through my Vue 3 Reactivity course, I highly recommend you take it before moving on.
Compiler Module. This knows how to take HTML templates and compile them into render functions. This can happen in the browser at runtime, but more often happens when a Vue project is built, so that a browser only ever receives render functions.
Renderer Module. The renderer contains the code for 3 different phases of rendering out a component onto a webpage.
Putting Vue 3 Together
Let’s think about a simple component with a template which uses a reactive object. When Vue loads up:
With this knowledge you are all set to jump into the instruction with Evan in the next lesson!
Reactions: planner7947, mikeangel02030, richarsonCV and 142 others

I love it!
Loving it..!
Read more…
Top Bottom
Text copied to clipboard.